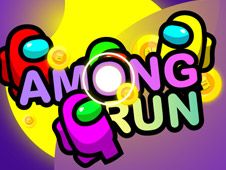 What is Among Run?

We're about to make our category of Among Us Games online even better than it already was, because a brand new running and jumping game online of the highest quality has just been brought over for you all, one that is called Among Run, which you can also play on mobile devices, and just like you want it, this game will test your limits!

How far can you run with the crewmate?

The crewmate will run on the course forward by himself, and you have to tap on the screen to make him jump, having to jump over the pits, as well as various traps and obstacles you encounter, because if you fall into the holes or hit the traps, you lose then and there, forcing you to start the game again from scratch.

If imposters appear before you, make it so that you get hit with the water of the same color as them, so that you can face them off and kill them. As you proceed, try collecting as many coins as you can, because the coins not only represent your score, but you can later on use them in the shop to buy all sorts of awesome new skins, upgrades, and cool stuff.

There should be nothing holding you back from playing the game right now, now that you're here, and we hope that you stick around for even more fun to come!