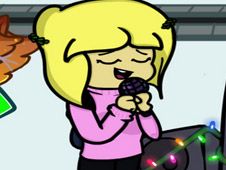 What is FNF vs Lav Full Week?

It's a great day to be fans of Friday Night Funkin Games online because there are plenty of them that our website has in store for you, just like you are proven right now with the addition of FNF vs Lav Full Week. The game takes place during a trip of BF and GF to Ontario, Canada, where they meet a blonde-haired girl called Lav, and you have to try and defeat her in a rap battle, after which you will also help her out to find her friend.

Can you and BF defeat Lav in a rap battle?

If you can, try to do it in either the story mode and its two weeks, or in the free play mode where you get to pick any of the six custom songs:

In case you're new to the franchise, let us help you now! To rap according to the song's chart, press arrow keys on your keyboard when the same arrow symbols from the screen match one another above BF, and not any other times, since that is a miss, and missing too much ends up with you losing. Instead, take the song to the end and dominate the progress bar to win! Good luck!