FNF Nerves but Every Turn a Different Cover is Used 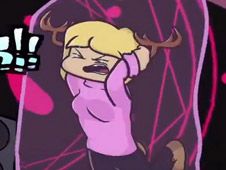 What is FNF: Gospel but is Sarvente vs Lav cover?

Both Sarvente and Lav are two really popular mod characters from Friday Night Funkin, and the two of them are going to battle it out right now on the iconic song known as Gospel from Mid-Fight Masses, something that you are going to join in right now, as you help Lav defeat Sarvente, as she is the newest protagonist here.

Despite Lav replacing BF, the gameplay of the game remains the same, which means that when you see arrow symbols above her match one another, you will have to press the same arrow keys, so that you follow the notes of the chart, and if you keep at it until the song ends, you become the winner.

You become the loser if you don't focus and don't have good timing, which means missing to press too many keys in a row, so don't let that happen for anything in the world. Enjoy!