FNF vs Smokey the Cat 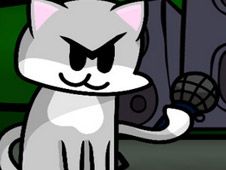 What is FNF vs Smokey the Cat?

When Boyfriend and Girlfriend met a cat during one of their walks, it was only natural that they would rap battle it, or, of course, this is what is normal in the world of FNF Games online, with our team being glad that right at this moment we get to share with you the game called FNF vs Smokey the Cat, featuring the following songs:

Do you have a better rhythm than a cat? Prove it right now!

Whether you are playing against Smokey in the Story Mode or the Free Play mode, your goal remains the same, which is to reach the end of the songs with the progress bar towards your icon to win.

That means you've had better rhythm, so, to achieve that goal, when arrow symbols above BF's head are matched with one another, you need to also press the same keys.

Don't get the timing wrong too many times in a row, because if that happens, you lose and have to start again, and we're sure this is not something you want to happen, right? Good luck!