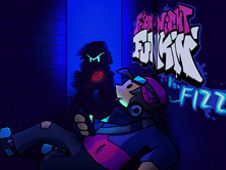 What is Friday Night Funkin vs Fizz?

We love it when on our website we can preview you with brand new FNF mods featuring new characters, especially because when their full weeks get released, we are on it to share them with you, just like it happens right now with Friday Night Funkin vs Fizz, where Boyfriend has to defeat Fizz on the song called Drift, with more of them coming soon!

Are you better at music than The Fizz? Then prove it right now!

To play the songs according to their charts, when you see arrow symbols above BF being matched with one another, you also have to press the very same arrow key on the keyboard, and if you keep doing this until the song ends, you will win.

Be careful not to press the keys at wrong times consecutively, because if that happens you lose and have to start all over again, and no one wants that, right?

Pick between the story mode and free play mode, choose a level of difficulty, and then start giving the game your best and having fun as only here is possible!