FNF vs The Goon 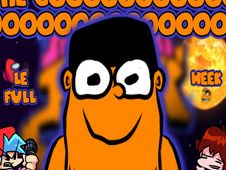 What is FNF vs The Goon?

Goon is one of the weirdest characters to have appeared so far into the Friday Night Funkin Games series, and that says a lot, considering how big and varied this page is, and he is a combination of two popular animated characters, Petter Griffin and Garfield, with you having to defeat him on the following songs:

Only you can defeat the being that is Goon, using music!

You can battle this character in either the story mode or free play mode, that is your choice, but the goal you have remains the same for each song, which is playing all its notes according to the charts, reaching the end of the songs to win!

You do this using the arrow keys, keys that you have to press at the same time as the arrow symbols above BF match one another, but don't press the keys wrong too many times, or you lose. Good luck, and stick around for even more fun yet to come!