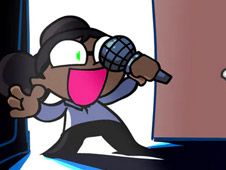 What is FNF Doxxie Mod?

Doxxie is a 9 year-old sore loser who doxxed Boyfriend after he defeated her in a multiplayer video game, and now that they have met in real life, our protagonist is about to have his revenge, through what he does best, which is music, so give your all to defeat this new antagonist on all the following songs:

Boyfriend Vs Doxxie, an internet feud come to life!

Whether you play this game in the story mode or the free play mod, you've got the same goal of reaching the end of the songs by playing all their notes according to the charts, something that you do by pressing the arrow keys at the same time as the arrow symbols above BF's head match one another.

Be careful not to miss pressing the keys too many times in a row, since that happening means losing the game and having to start all over again from scratch. Enjoy!