FNF vs Gunter the Penguin 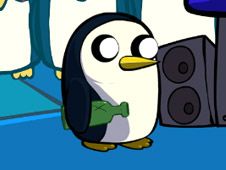 What is FNF vs Gunter the Penguin?

Gunter the Penguin is from the Adventure Time universe, one where you and Boyfriend have now ended up in, and the only way that you can get out of it is if you beat him up in a rhythm battle, which is precisely what we are inviting you all to do right now and here with this awesome game known as FNF vs Gunter the Penguin, which has two awesome songs for you:

Defeat Gunter and escape out of the Adventure Time world!

In this rhythm game, which can be played either in the story mode or the free play mode, you've got the goal of reaching the end of the songs by playing all their notes, since that is the only way to get there and win the battle.

To hit notes, use the arrow keys, keys that you have to press at the same time as arrow symbols above BF match one another, but be careful not to miss doing it too many times in a row, or you lose and have to start again. Good luck!