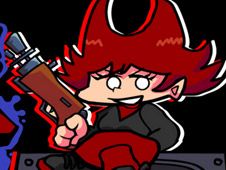 What is FNF: Schoolyard Scuffle Vs Cassandra?

Rap battles between Cassandra and Pico are always going to be tons of fun to be had, which is why we are very happy that right at this moment on our website we could share with each and every one of you the game known as FNF Schoolyard Scuffle, where the two of them go back to their old school days, and fight off against one another on songs from that time:

Pico Vs Cassandra, the schoolyard rap battle you've been waiting for!

After making your choice between the story mode and free play mode, give it your best to reach the end of the song by playing all of its notes according to the charts, because only then do you win!

When the arrow symbols that float around match with those above Pico's head, you will have to press the same arrow key, but know that if you miss that moment multiple times in a row, you lose and have to start again from scratch. We wish you good luck and all the best!