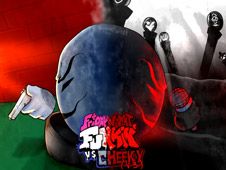 What is FNF vs Cheeky v3?

Cheeky is one of those FNF meme characters that is always really fun to rap against, has a fully-developed mod, and this mod has now become even bigger, not only through the addition of new songs and weeks, but also because his friends Bob and Ron also show up at times, so be on the lookout for them. The structure of this new FNF Cheeky Mod V3 is this one:

Defeat Cheeky and his friends for musical supremacy!

Whether you play in the story mode and challenge the weeks and their character, or you play with any one song you want by choosing it in the free play mode, your goal remains the same, and it is to reach the end of said songs by playing all their notes.

This is done by pressing arrow keys at the same time as the identical arrow symbols above BF match one another, but know that if you miss doing it too many times in a row, you will lose and have to start again from scratch.

Good luck we wish you, all the best, and hope to see you around even more!