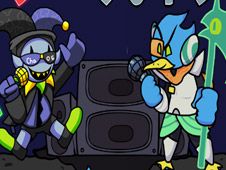 God Eater is an iconic track that is usually associated with the all-powerful Shaggy from Scooby-Doo, but right at this moment, two other characters are doing to sing it together, two of which have appeared in the Friday Night Funkin' Games series before, but the first time together, and we're talking about Jevil and Berdly!

Simply hit the play button, as there's only one song, so only one mode, and give it your best to play all the notes at the right time in the charts in order to reach the end and win!

This means that when arrow symbols match above your character, you will have to press the same arrow keys from the keyboard, but know that if you make too many misses in a row, you lose. Enjoy!