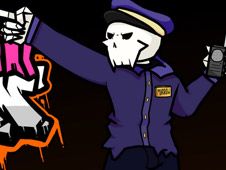 What is FNF vs Marrow?

FNF Games with skeletons have never disappointed today, and the subway conductor skeleton known as Marror won't disappoint today either, when you get to have tons of fun going in a rhythm battle against him, something that you will be doing on the following custom songs dedicated for him:

Defeat the skeleton conductor and get yourself out of paying a fine!

After choosing if you face this character in the story mode or free play mode, try reaching the end of the songs by playing all their notes, since that is the only way that you win. How? Well, you press arrow keys at the same time as the identical arrow symbols above BF match one another.

Be careful not to press the keys too early, too late, or press the wrong keys, since that counts as a miss, and if you have made multiple mistakes in a row, you end up losing. Enjoy!