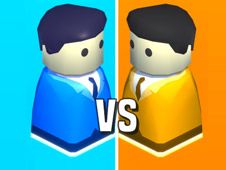 What is City War 3D?

City War 3D is going to be a bit different from the previous war and strategy games online that you might have played here so far, and precisely for that reason we now wanted to share it with you since there is no doubt in our minds that just like we have had a great time with it, the same will be true for you right now!

You will control the blue houses and the troops in them, using the mouse to drag lines from one house to another to make your troops move. If you find empty houses, take control of them so that you build a bigger army, with each type of house generating more or fewer troops per beat.

The ultimate goal you have is to overpower the red houses, so if you can generate more troops than them and attack them, if they have fewer numbers, they will lose, meaning the computer, since you're playing against it. As soon as a new level starts, quickly watch the environment, and find the best route to move your troops through to get the upper hand and win!

Start now, we wish you all the best towards winning, and we hope to see you around some more because we are never out of cool new games to share with you!