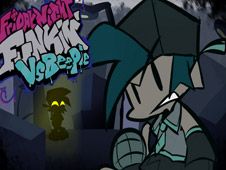 What is FNF vs Beepie V2?

Beepie is Boyfriend's #1 Fangirl, which is why she looks so much like him, and they have now met at an anime convention and are having a rhythm battle against one another, but we now have plenty of more new songs than the previous version, with this one having two full weeks:

Boyfriend Vs Beepie, a fan vs idol FNF encounter!

Choose between the story mode and free play mode in the game's main menu, and whether you choose one or the other, you need to reach the end of the songs to win in both cases.

To do that you watch for the moment when the arrow symbols that float around BF match above his head and press the identical arrow keys at the same time.

That is how you keep hitting your notes, but if you miss doing it multiple times in a row, you end up losing and have to start again from scratch, so focus not to let it happen, and have the best time possible!