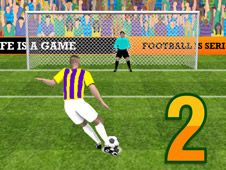 What is Penalty Shooters 2?

Soccer fans will love to play Penalty Shooters 2 online on our website right now since it is not only free of charge, but one of the best penalty shooting games online we've had here, featuring the most popular kick in the sport's history, which oftentimes can make or break a team, as many have won from it, many have lost.

Let's become the best Penalty Shooters on the internet!

This game allows you to play in fantasy leagues of the top countries in the sport, such as England, Spain, Italy, Brazil, Germany, or you can even play with national teams in the World Cup. Score more goals than the opposing team in the penalty shootout, with each team getting five shots per round.

When you are shooting, hold the mouse button and move the target, releasing when you are in the spot you want to make the shot. If you are goalkeeping, tap on the spot in the net where you think the ball is going towards, and jump towards it to grab it, if you were right.

Let the best penalty tournament in the world begin, and make sure to invite your friends to check out more of our amazing games as well, they won't be disappointed any day soon!