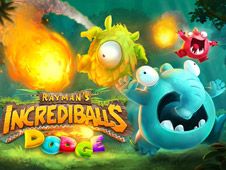 What is Rayman's Incrediballs Dodge?

Rayman's Incrediballs Dodge is one new multiplayer game online in 3d with io mechanics inspired by battle royale games unlike you've ever played before on our website, so giving it a chance right now is what we absolutely hope you will be doing, even if you've never played Rayman Games online or anywhere else before!

Enter Rayman's arena and doge the incrediballs to survive the longest!

You will be thrown on a map made out of blocks together with players from all over the world, and you use the arrow keys to bounce your avatar from one spot to another, the goal being to survive for as long as possible.

How? Well, firstly, avoid traps, holes in the grounds, obstacles, and the like, as well as attacks from other players that might be directed towards you, because you only have three lives, don't lose them!

Instead, grab new lives when you can, as well as upgrades and weapons to use against the other players, and as the arena keeps shrinking, you go on while they get eliminated.

It's a blast, and the more you play, the better you become at dodging and attacking at the same time, and we definitely hope to see you come back to playing this game as often as possible. Enjoy!