FNF: Spectral Spat but Everyone Sing it 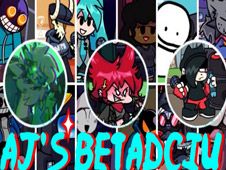 What is FNF: AJ’s BETADCIU, Everyone sing the Song?

Let's sing AJ’s BETADCIU with everyone from FNF in a brand new awesome mod unlike many you get to play here since those where you mash-up with many characters all going up against Boyfriend are always among the best, and with three awesome songs:

AJ’s BETADCIU is here, let's sing it with everyone!

As the arrow symbols float and match above BF's head, that is when you have to press the identical arrow keys at the same time and keep doing it to hit your notes according to the charts until the song's conclusion, which is when you win. Be careful not to miss notes multiple times in a row, or you lose and have to start again from scratch.