FNF: Spectral Spat but Everyone Sing it

FNF Takeover but Everyone Sing it 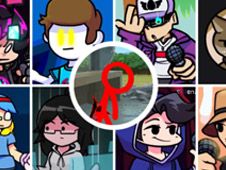 What is FNF: AJ’s BETADCIU, Everyone sing the Songs?

AJ’s BETADCIU from FNF returns right now with six songs where all of the characters take turns singing them, meaning that every cover possible of it is being used, and you will go through them all if you manage to help BF hit his notes correctly and win against the onslaught of characters. The tracklist is:

Everyone sing the Songs in AJ’s BETADCIU FNF mod!

After you've made your choice between story mode and free play mode, in either case, make sure you reach the end of the songs by playing their notes according to the charts, which is how you achieve victory.

To do that, press arrow keys at the same time as the identical arrow symbols match above BF. Know that missing to hit them too many times in a row leads to you losing, so focus and win instead. Good luck, enjoy!