Cuphead: Ruse of an Ooze 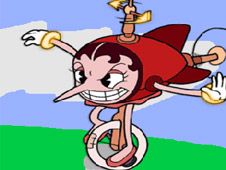 What is Cuphead Threatenin' Zeppelin?

Come play Cuphead Threatenin' Zeppelin, a really interesting online re-creation of one of the game's most popular boss fights, where Zelda has transformed herself into a zeppelin, but you and Cuphead are aboard a plane that will aim to shoot her down from the sky, with tons of fun to be had from doing so!

Use the four arrow keys to fly in the air with your plane, pressing the Z key to shoot missiles, and a special bomb when you have enough energy to use it. Always avoid the shots that Zelda throws at you because if you get hit too many times, you will be brought down from the sky, forcing you to start again from scratch.

Defeat this terrifying new boss fight in Cuphead by shooting her instead, and have the best time possible! The category has even more to offer you, so don't hesitate to check it out right away!

Use the arrow keys, Z key.