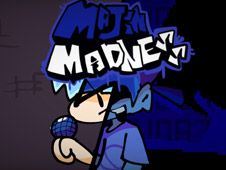 What is FNF Majin Madness Plus?

In FNF Majin Madness Plus we have Majin Sonic returning as an antagonist, with him having been quite a ferocious one every time we've met him so far, but today it is going to be extra-hard to beat him, since he has his full week, meaning you have to defeat him on four tracks:

Whether you're playing in the story mode or free play mode, know that winning is achieved in the same way, by reaching the end of the songs, something that you do by hitting your notes according to the charts until that point.

This means that you have to press the arrow keys at the same time as the identical arrow symbols match above BF's head. Be careful not to miss hitting them too many times in a row, or you will lose. Good luck, enjoy!