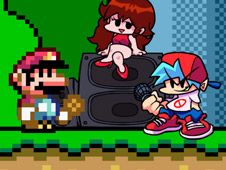 What is FNF vs Marlo Mod?

Marlo is a new kind of Mario that you now encounter in the world of FNF Games, with Sonic also making an appearance, and we're very happy that you are trying out this mod right now, especially since it features four new amazing tracks:

After making your choice between the story mode and free play mode, in either case, make sure to reach the end of the songs by playing their notes according to the charts.

To do it, press arrow keys at the same time as the identical arrow symbols match above BF. If you miss doing it too many times in a row, you lose, so focus on winning instead. Good luck, enjoy!