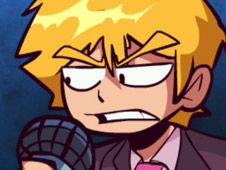 What is FNF Sans vs Reigen Tumblr Man?

Sans from Undertale and Reigen from Mob Psycho 100 take on each other in the newest FNF mod to determine who is the sexiest Tumblr Man, which was a real-life event that became a meme, and which we are now sure you will really appreciate and have tons of fun with!

Who will win the FNF x Tumblr Man showdown of Sans vs Reigen?

When floating arrow symbols match above the character on the right, that is when you need to press the identical arrow keys to hit your notes, and doing it until the song ends means winning, but missing your notes multiple times in a row means losing. Good luck, enjoy!