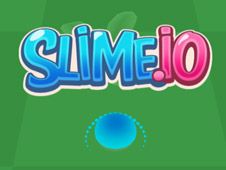 Slime.Io is one of the cutest multiplayer io games in the eat-or-be-eaten genre that we've had here in quite a while, a 3D game at the same time, having tons and tons of awesome elements that we think you are going to love from the start to finish, just like we did, hence why we made sure to share it with you all as quickly as we could!

With the mouse you move around with your slime, having to eat other slimy things that you find around, using them to grow bigger, and by doing so you should eat other slimes that are smaller than you, eliminating them, while avoiding those bigger than you, since they are going to kill you instead, of course.

By getting bigger you also unlock new abilities such as dashing or dividing but know that when you use them, it takes out of your mass, so you are going to become smaller as a result. Good luck, we hope you survive for long and climb the rankings, and also have tons of fun as only here is possible!