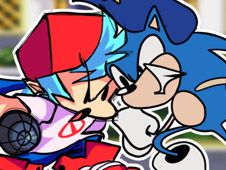 What is FNF Speed Criminal with Police Sonic?

FNF Speed Criminal with Police Sonic is a really funny and well-made mod where Boyfriend has done something illegal, so Police officer Sonic is going after him, and now they are going to have a duel of music, which will be quite a lot of fun, we promise!

Reach the end of the song to win, doing it by hitting your notes according to the charts until the end of the song, something you do by pressing arrow keys at the same time as the identical arrow symbols match above BF, on the right.

Don't miss your notes multiple times in a row, because messing up the chart decreases the health bar, and if it gets completely empty, you lose and need to start again from scratch. Enjoy!