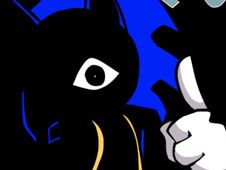 What is FNF vs Cyclops Sonic (Speed.GIF)?

Cyclops Sonic is a version of the speedster hedgehog that only has one eye, and he comes from the Speed.GIF meme, and we've got no doubt at all that you will have tons of fun in a rhythm battle against him on the song called 'Control'!

BF Vs Cyclops Sonic, let's speed it with music!

Hit the free play mode, and then keep hitting your notes until the conclusion of the song to win, because that is the only way to achieve victory. To hit the notes you press arrow keys at the same time as the identical arrow symbols float and match above BF. If you miss doing it many times in a row, you lose, so focus not to let that happen. Enjoy!