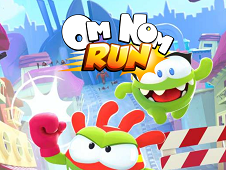 What is Om Nom Run?

Om Nom Run is a competitive game in which you will have to run with Nom, a cute frog who wants to reach the top of the leaderboard to win as many races as possible, and at the end of the game to be in the top. Come and help the cute frog so that it gets where it wants.

The game has several missions to complete. The first of them would be to overcome the distances imposed by the game and to collect as many coins as possible because they will help you a little later. In the game, you will have to run as fast as possible and avoid obstacles in your way. If you do not avoid the obstacles and you will hit them you will lose the whole level and everything you have accumulated until that moment.

It is important to remember that during the race you will also meet boosters that will help you collect for example more coins or that will propel you into space with an amazing speed so that you will cover the distance faster and you will collect even more coins. The coins will be useful to bring improvements to the character and to make him much faster on the route. The more coins you have, the faster you will bring performance into the game.

We hope you enjoyed this game and we gladly invite you to discover other games on our site. Have fun!

use the arrow keys