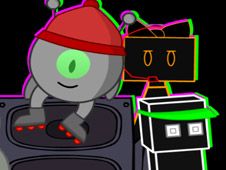 What is Fine Night Funkout?

A new day on the horizon means a new opportunity for having fun by playing new Friday Night Funkin' Games online on our website, something that we are gladly inviting you all to do right at this moment when we have added for you all the game called Fine Night Funkout, a brand new cool mod you should not be missing out on for anything in the world!

The creator of the mod was curious to see how many flash games characters he could put in a single mod from FNF, so you will battle rhythmically these characters one after another, if you win against them, of course.

To do so, you need to have a better rhythm and hit all the notes of the songs along the way, something that you do using the arrow keys. When the arrow symbols above BF match, press the same arrow on your keyboard.

Be careful not to miss pressing too many keys in a row, because if that happens you lose and have to start all over again, and you would not want that, right? Good luck!