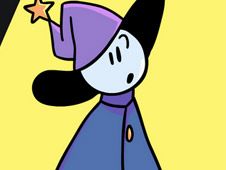 What is FNF vs Desert Journey Duel?

While traveling through the desert, Boyfriend and Girlfriend met all sorts of magical beings and interesting characters, such as the magician with a hat featured in the song Dunes, or the masked knight featured in the song Mighty, with this awesome game having two characters, each with their own songs, and this is just half because when the updated version will arrive, you will have two more.

Help BF win the rhythm duels against the travelers of the desert!

You can battle against these characters in either the story mode or free play mode, and in both versions, you have to give your best to reach the end of the songs and make the progress bar turn in your favor to become the winner.

To achieve this you are going to use the arrow keys, pressing them when the same arrow symbols match above BF, and, when they do, you are playing the songs according to their charts.

You lose in case you miss to press the keys too many times in a row, so we hope you are careful enough not to allow that to happen. Good luck, enjoy, and stick around for more awesome fun to come!