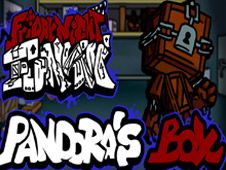 What is FNF vs Pandora’s Box?

Pandora's Box is a mythological magical box created by the goddess Pandora, and this all comes from Greek Mythology, and after humans opened it up, it unleashed curses and bad things all over the world, and now it is a walking and talking box come to life, but, more importantly, it is a singing one.

Pandora's Box is the newest antagonist from FNF that Boyfriend has to face off against, and we hope that you are going to help him win on all the custom songs:

To win the rhythm battle you need to prove you've got better timing than Pandora's Box, so take the songs to their conclusion and turn the progress bar in your favor to win. To hit all the notes of the songs at their right time in the charts, press the arrow keys at the exact same time as the arrow symbols match above BF.

Be careful not to press the keys too late or too early, because that counts as a miss, and while one miss is ok, missing too many notes one after the other one results in you losing the game. Start now, and have fun like only here is possible!