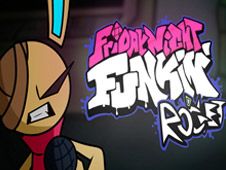 What is FNF Vs Rocket?

Somehow, Boyfriend and Girlfriend ended up in the laboratory of a mad scientist, where they found a rabbit that was experimented upon and is called Rocket, a rabbit that is now challenging to a rap battle, which he can take part in since he can sing, rap, and dances! This demo mod contains two original songs so far:

Can you defeat the musical rabbit, Rocket?

If you think so, then try to face off against it in either the story mode or free play mode, giving it your best to play the songs correctly according to their charts, and if you reach the end of the songs and the progress bar is towards you, you've won.

You will use the arrow keys to play the notes of the songs, so when the arrow symbols above BF are matching with one another, you have to press the same arrow keys on the keyboard.

Be careful not to miss pressing the keys at the right times too many times in a row, since if that happens you have lost and will have to start all over again from start. Enjoy!