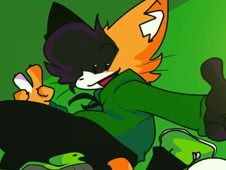 What is Friday Night Funkin vs Kauan?

Kauan is a very funny cat who also has great chops in music, and some would even say that he is Kapi's brother, although no one knows for sure. He kept watching Boyfriend's rap battles until he surprised him during one of his walks with GF, and now the two are battling one another on the three custom songs:

Boyfriend Vs Kauan, a man vs cat rap battle!

After choosing to battle this character in either the story mode or free play mode, give it your best to reach the end of the songs with the progress bar in your favor to win, which happens if you've hit the notes of the songs according to their charts.

When you see the arrow symbols above BF match with one another, that is when you also have to press the arrow keys, but be very careful not to press them at wrong times too many times in a row, because if that happens, you lose and have to start all over again. Good luck, and enjoy!