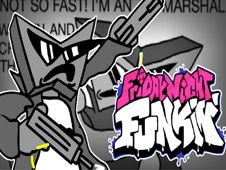 What is FNF vs The Air Marshal?

Come play FNF vs The Air Marshal right now, since this is an interesting new mod featuring Boyfriend and this character having a rhythm battle on a moving train, on the song named after this character.

To achieve victory you need to reach the end of the song by playing all of its notes according to the charts, so when you see arrow symbols float and match above BF's head, press the identical arrow keys at the same time. Keep at it until the song proceeds, but know that if you miss hitting too many notes in a row, you lose. Good luck, enjoy!