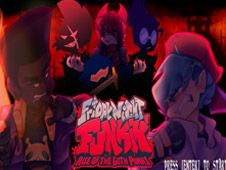 What is FNF vs Cyclops (Rise of The Goth Punks)?

Play FNF vs Cyclops ( Rise of The Goth Punks) and rock it out with this new character in a mod you should not be missing out on for anything in the world, as you're about to have a fantastic time with it from start to finish, just like it had been the case for us, which is not surprising considering the following songs:

From the game's main menu you have to make a choice between the story mode and free play mode, after which you need to give your best to reach the end of the songs to win, in either case.

When you see arrow symbols float and match above BF's head, that is when you need to press the identical arrow keys from the keyboard to hit said notes.

Be careful not to miss hitting the notes too many times in a row, because that happening leads to you losing and having to start again from scratch, so good luck with all of it!