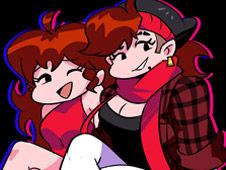 What is FNF Big Swingin’ Sister vs Sister Searest?

Sister Searest is GF's sister from FNF, who is in a big band, and after BF and GF went to her concert, they started funkin' it out with them, something that we invite you to do right now with this full mod, and its tracklist:

From the main menu, you choose between the story mode and free play mode, and then, in either case, give your best to play your notes according to the charts and reach the song's end, which is how you win.

So, when you see arrow symbols match above BF, that is when you press the identical arrow keys. Don't miss doing it too many times in a row, because if that happens you lose. Good luck, enjoy!