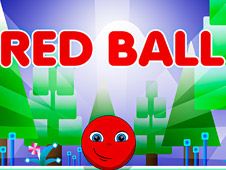 What is Red Ball?

Red Ball is a new game featuring the iconic video game character, albeit a new version of it, made by an entirely different team, meant as an homage, but also as a new opportunity for fans of this series to have a fresh experience, as we've already reached many chapters in that story, so having some fans creating something really new is certainly going to breath a lot of life into this series!

Once more, join the adventures of Red Ball online!

Four stages are featured in this game in total, each being able to earn from one to three stars, and with the coins, you earn you can buy new skins for the Red Ball, in many other colors, as well as looks. The game is set at Christmas, the holiday you try to save, so all the stages feature snow and ice.

Move through the courses using the arrow keys, the left and right ones for moving forward and backward, and the up one to jump. Avoid obstacles and traps, collect the coins along the way, and reach the flag at the end of the levels to finish said levels and advance to the next ones, until the whole story is completed!