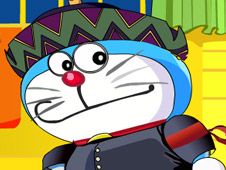 What is Doraemon Dress Up?

Doraemon is not the type of guy who is really into fashion, as he is usually dressed up in just his fur, having his necklace with a bell on him. Well, his New Year’s resolution has been to change that this year, and he has gotten more into clothes, and hopes that he will dress up more sharply, which is what you are here to help him in the game called Doraemon Dress Up.

You get to be Doraemon’s stylist, how cool is that? To dress him up you are going to use the buttons to his left and right, all of them representing a different part of his outfit, from clothing, accessories, to footwear. For example, hit the hat button to change between cowboy hats, fedoras, simple caps, and more.

You have different jackets, shirts, and other clothes, you can pick a belt for the character, with some of the outfits available for him being inspired by characters such as Goku or Sonic, also coming from Japan. Don’t forget to pick his pair of shoes, and you can also change the bell necklace that he wears to another model.

With the last three buttons to the right, you can modify the shape of his eyes, that of his whiskers, as well as that of his mouth, so you have a say even in his facial expression. We’ve got no doubt at all that you will mix and match items in great style, and at the end of the game Doraemon will turn out being one of the best-dressed anime characters ever!