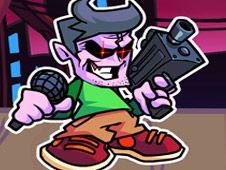 What is FNF Vs Daddico?

Who is Boyfriend's newest antagonist, Daddico? Well, he is one of the most cursed antagonists so far, as it is a combination of Daddy Dearest, from whom we've got the head, and Pico, whose body this character has. To completely get rid of this abomination, help BF defeat him in a musical battle on the original songs called:

Of course, these songs are mashups between songs of the Pico Week and of the Daddy Dearest Week, and we will now explain to you how to beat them!

A quick introduction to the gameplay of Friday Night Funkin online:

To win this rhythm battle you need to reach the end of all the songs and turn the progress bar in your favor, so when you see the arrow symbols matching above BF's character, that is when you have to press the same arrow keys on your keyboard, simple as that.

You lose if you press the wrong keys too many times in a row, so be very careful not to let that happen, but win instead and give this game your best!