FNF vs Spy vs Spy 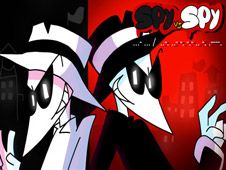 What is FNF vs Spy vs Spy?

The spies featured in this brand new FNF mod of our website come from the Mad magazine comics, and you will now act as one spy and have a rap battle against another spy, just as the title suggests, and you will do it on quite a few awesome tracks:

A rap battle of spies, who is going to win?

You are going to play this game in either the story mode or free play mode, that is your choice, but in either of them you have the same goal, and it is to reach the end of the songs by playing all their notes.

To do that, you watch for when arrow symbols above Spy match one another and press the very same arrow key from your keyboard. Be careful not to miss pressing them too many times in a row, since that leads to you losing the whole game. Enjoy!