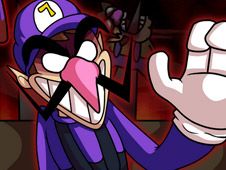 What is FNF vs Wah?

Wah is an even scarier version of Waluigi, the famed Mario Bros Games characters, and it is our pleasure right now that he is making his debut in the category, where we are sure that together with Boyfriend you will have tons of fun going up against him on the two following custom songs:

Use music to defeat the evil Waluigi!

Whether you choose to play in the story mode or free play mode, the way you do it is the same, as you have to hit all the notes of the songs at the right time in the charts to win.

To do this, watch for when arrow symbols above BF match one another, and, at the same time, hit the identical arrow key from the keyboard. Be careful not to miss multiple notes in a row, since that leads to your loss and having to start again.

Good luck, all the best we wish for you, and we hope to see more of you here today, as usually!