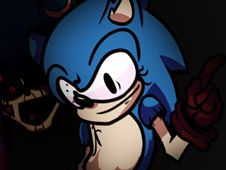 What is FNF Vs Xeler Sonic ?

Xeler Sonic represents the newest version of this beloved speedster hedgehog character that makes appearances in the world of FNF Games quite often, so of course, you should give this new mod a chance, even more so with the following songs in its tracklist:

Know that missing to hit your notes too many times in a row leads to your loss, so don't let that happen, because if your health bar depletes totally, you're toast!