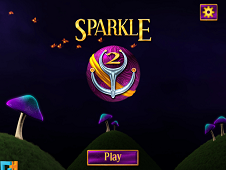 Sparkle 2 is a kind of Zuma game, where you have to do the same thing as in a classical Zuma task but not as simple. This time, the action won't happen in a temple or something like this, but in the middle of the nature, on the grass, under a big tree and next to the water. The rolling line, who won't stop ever if you do not stop it, must be stopped by you as soon as it is possible and do not let the balls, which are coming through this line, to get in the hole, because if one ball touches the surface of the hole, the whole mission is lost and all the ball will follow it. You will have a kind of magical cannon, which will shoot sparkling balls for you just as those ones in the rolling line so the balls will vanish in that moment when you've mixed by shooting at least three the same colored balls next to each other. There could be three or more same colored balls so as they are more, as the score board increases and more sparkling balls will disappear. Good luck in this awesome and so cool game and do not forget that using the mouse will be so necessary for you to aim and shoot!