Which Mao Mao Character Are You

How to Draw Mao Mao 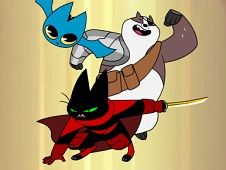 What is Mao Mao Jelly of the Beast?

We are bringing for you dear kids today the Mao Mao Jelly of the Beast game for children, in which you can see that the latest Cartoon Network series characters are back here on our website, and they are bringing for you guys a brand new hero fighting monsters adventure challenge.

You dear kids can see that Mao Mao is going to be the main characters of this new Jelly of the Beast game, and he is going to need your help to finish his latest adventure. In this new game for boys, Mao Mao has to fight against a Jelly Beast monster that has eaten a lot of the little animals from the Pure Heart Valley town, and you will have to fight the monster in order for the animals to be free again.

One of the little animals is going to be be trapped in the Jelly Beast balloon, and you dear kids will have to strike the monster on it's middle in order for Mao Mao to slice it with his sword. After a few strikes, you will see that the Jelly Beast will pop, and the little animal that was trapped will be free, and you will be able to go to the next level and gain more points.

Be very careful though, because dear kids you will see that Mao Mao has to evade the little animals that will bounce all over the place inside the Jelly Beast. Make sure that you will manage to gain a lot of points in this new Mao Mao Heroes of Pur Hear game from Cartoon Network, and the little animal characters will return as fast as possible here on our website. Have fun!