FNF vs Byron the Mafia Boss 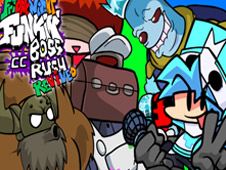 What is FNF vs Castle Crashers Boss Rush REVIVED?

Friday Night Funkin's Boyfriend has somehow ended up in the universe of the Castle Crashers Games, and he has become a knight who does battle using music and rhythm, and now you need to help him defeat various bosses from this series in rap battles, something we are positive you will enjoy a whole deal!

The game has seven bosses for you to defeat, and each one brings along its own custom track:

Use your rap skills to beat the Castle Crushers bosses!

Defeat these antagonists in either the story mode or the free play mode, it's up to you, and give it your best to reach the end of the songs with the progress bar being in your favor, something that is done by hitting all the notes of the songs at the right time.

This means that when you see the arrow symbols above BF match with one another, you need to press the same arrow keys as well, but if you miss that moment too many times in a row, you lose, so don't allow that to happen for anything in the world! Let the fun start now, and stick around for more of it!