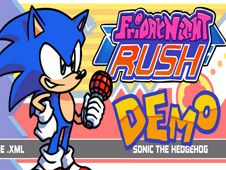 Sonic replaces Boyfriend as the protagonist of this new FNF rhythm battle inspired by the Sonic Rush game, with that version of the hedgehog being featured here, or you can do the classic battle of BF Vs Sonic!

It's time for a Friday Night Rush with Sonic!

Whether you play in the story mode or free play mode, to win you need to reach the song's end, something that is done by hitting your notes according to the charts until then and turning the progress bar towards you.

This means pressing arrow keys at the same time as the identical arrow symbols match above your character, but missing to do it multiple times makes you lose, so focus and win instead. Enjoy!