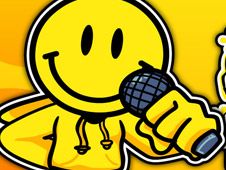 What is FNF vs Smiley Face?

Smiley Face, who is exactly what his name entails, is the DJ at a party where you and Girlfriend are present, so when he noticed you, he put on the sickest tracks he wants, hoping you were going to groove to them, something we invite you to do right now and here in the game called FNF vs Smiley Face, which features the following custom songs:

Have a funkin' good time with Boyfriend and Smiley Face, right now!

The game can be played with dialogues and cutscenes in the Story Mode, or you can strip everything back and just have the music battles in the Free Play mode, it's all up to you which you choose.

In either, give it your best to reach the end of the songs and turn the progress bar towards you, meaning that when you see arrow symbols float above BF and match with those over his head, you have to press the same arrow keys.

Be careful not to press the wrong keys or get the timing wrong too many times in a row, because if that happens you lose and have to start all over again from scratch. Enjoy!