FNF vs Girlfriend Got Burnt Bread 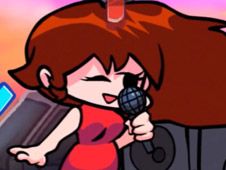 What is FNF HEARTBREAK Vs Girlfriend?

After such a bad fight between Girlfriend and Boyfriend, the only way that they could get past it would be to rap battle each other, which is what they are going to be doing right now and here with the game called FNF HEARTBREAK Vs Girlfriend, where you battle GF on a bunch of awesome new songs, some entirely original, some covers, some remixes. Here is the list:

Boyfriend Vs Girlfriend, a musical battle between lovers!

Choose to go in either the story mode and learn more about the context of this fight between the two, or simply pick any song you want from the free play mode.

To hit notes according to the charts, wait to see when the arrow symbols floating around match with those above BF's head, and when they do, press the same arrow keys on the keyboard.

Keep at it until the song ends, and you win, but be careful not to miss too many notes one after another, because if that happens, you lose and have to start again from scratch. Enjoy!