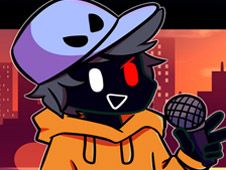 What is FNF vs TwinBots?

BeatBot and HackBot are two robots who are twins, although they have different personalities and styles themselves, one of the main things they have in common is their love for music and their skills with rhythm, something that they now want to show off against Boyfriend in a rhythm battle, but you are here to help our protagonist win. This is a full week mod featuring the following songs:

Defeat the TwinBots and remain the rhythm champion!

To win rhythm battles in this kind of game, where you have to do is keep hitting the notes of the songs at the right time, so when you see arrow symbols above BF being matched with one another, make sure to press the same keys, and keep doing it until the end of the song to win.

You win once the progress bar has tilted fully in your favor, but be careful not to miss pressing the keys too many times in a row, because if that happens, you will eventually lose. Enjoy!