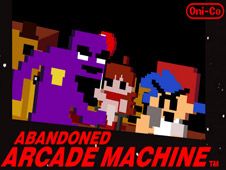 What is FNF VS Purple Guy (Abandoned Arcade Machine)?

One day, Boyfriend and Girlfriend went to an abandoned arcade place that they used to frequent back in the day when they were popular, and there they found that one of the characters in one of the machines, Purple Guy, has come to life, so now you have to send him back into his video game by winning the rhythm battle, something that we invite you all to do right now, on the following custom songs of this game:

Defeat the Purple Guy with music to send him back into his video game!

For starters, you will see that the main menu looks like a video game from an arcade, and the Story Mode has been rebranded as the 1P mode, and you can also pick to play any song you want from the Free Play mode.

After that, for each song you are battling on, watch for when the arrow symbols above BF's head match one another, and then press the same arrow keys on the keyboard yourself.

Be careful not to press the wrong keys too many times in a row, or get the timing wrong too many times, since that will eventually cause you to lose. Enjoy!