FNF Vs Meri (literally every fangirl ever) 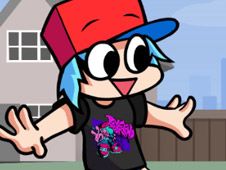 What is FNF vs Lexi (Fangirl Frenzy)?

Lexi is one of Boyfriend's newest FNF fangirls that he has to defeat in a rhythm battle, because otherwise how would she snap out of her senses and stop dressing up as her idol? This is a cool full week mod where you have to go up against this new character on the following tracklist:

After you make your choice between the story mode and free play mode, in both cases you only win if you reach the end of the songs. So, when arrow symbols match above BF's head, that is when you have to press the identical arrow keys. Be careful not to miss hitting the notes too many times in a row, or you lose and have to start again from scratch. Good luck!