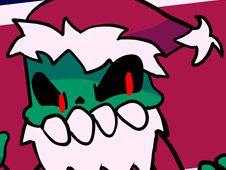 What is FNF Zanta’s Holiday!?

Let's go with Zanta from FNF on Holiday in this brand new mod where you face off with zombie Santa, a very popular character in this universe ever since his debut, who you will now attempt to defeat on the song called Dead-Snow!

It's time for Zanta's Holiday, only in FNF!

As the song progresses, when you see arrow symbols match above BF's head, that is when you need to press the identical arrow keys to hit your notes, doing it until the song's conclusion to win, but be careful not to miss hitting said notes too many times in a row, or you lose. Good luck, we wish you the best, and invite you to try out more of our daily content after this game!